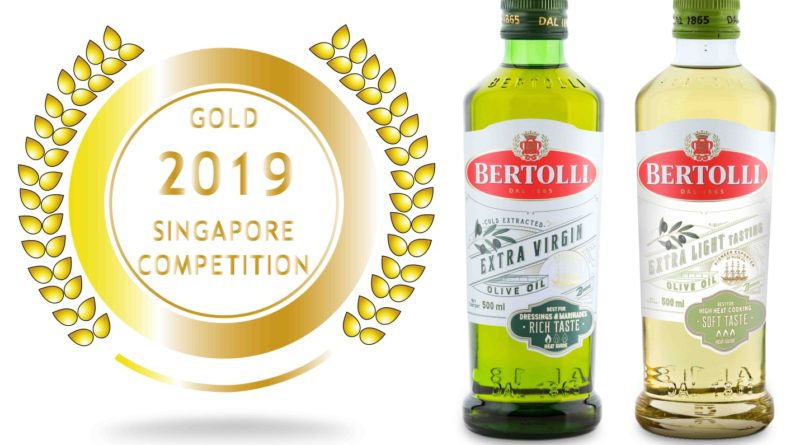 The event, hosted by business promotion Singapore Newspaper, collated the opinions of professional importers and distributors, journalists and food-and-beverage specialists following tasting sessions in Paris and London earlier in the year.

Bertolli Extra Virgin Olive Oil has been earning acclaim all around the world in recent years, with tasters commenting on its top-quality blend of extra virgin olive oils, cold-pressed for a naturally full-bodied fruity flavor.

It’s delightful straight from the bottle on salads, pasta, marinades, soups and sauces and also makes a delectable dip.

Bertolli Extra Light Tasting Olive Oil is indeed light in taste and ideal for high-heat cooking such as frying, baking and everyday use.

Alberto Perez Martin, Head of Asia at Bertolli, said the brand has been available in Singapore and the rest of Southeast Asia since the 1960s. The Bertolli family of products is currently sold in more than 200 stores throughout the country, in major supermarkets and hypermarkets such as NTUC Fairprice, Giant and Cold Storage.

“Bertolli olive oil carries with it 150 years of expertise and is currently the world’s number one olive oil brand,” he said. “Quality has always been our central focus, and for that reason our quality standards are higher than those set forth. We carefully select only high-quality olives, cropped early.”

When an olive is picked while green and fresh, the oil is fruitier, more complex and contains more polyphenols. Polyphenols are important when describing the health benefits of olive oil. They are micronutrients with antioxidant properties that play an important role in preventing and reducing the progression of common illnesses such as diabetes, cancer and cardiovascular diseases. So, an early harvest guarantees an oil that contains the maximum level of polyphenols for good health. If, on the other hand, you pick a mature olive that’s completely ripe, it will contain lower levels of polyphenols—and thus yield a less nutritious olive oil.

Looking ahead to coming years, Perez Martin said Bertolli wants to be the brand that consumers in Singapore will go for when it comes to olive oil. “It’s competitive and challenging within the category, but product superiority and differentiation in the way we communicate are values that we believe will set us apart from the rest.”

Bertolli’s roots go back to 1865 and a small shop in the Italian town of Lucca. Ten years later, founder Francesco Bertolli opened the Bertolli Bank and Exchange, which granted loans to Italian emigrants moving to the United States, and it was they, feeling homesick in the New World, who began writing to Francesco Bertolli asking him to send them his olive oil. This is how Bertolli pioneered the export of olive oil to the US and other countries.

Bertolli only works with established farmers who are known for producing olive oil at the standards the company requires. Each year, more than 20,000 oils are sampled from around the world. Of these, only 20 percent make the cut to become a Bertolli blend. By expanding the regions from which it selects the olives, Bertolli is able to ensure a higher-quality product that isn’t placed at risk by climate issues or pest problems.

Watanabe Sake Brewery : The Brewery with the Most Smiles in Japan