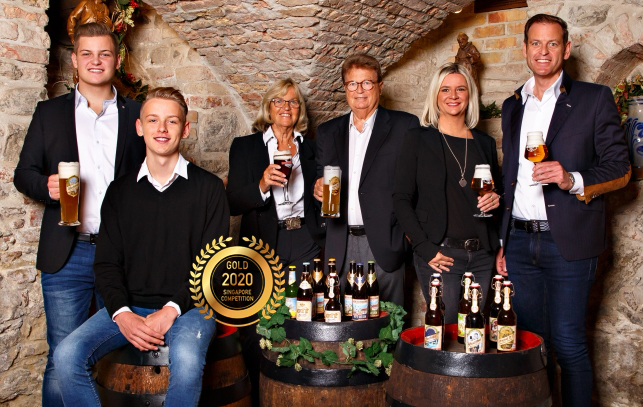 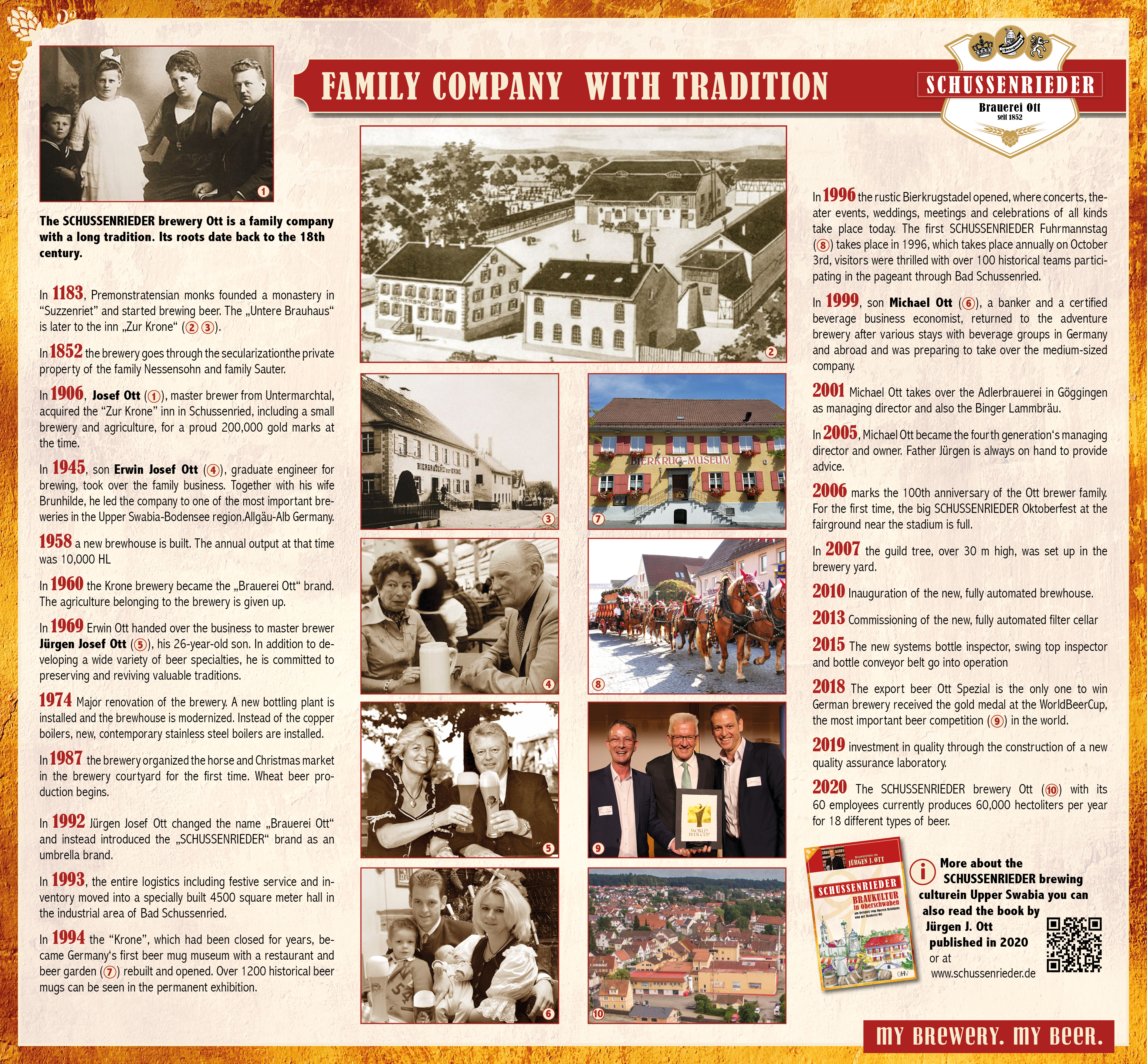 Tradition is a term that stands for tradition, for custom, for habit, for the traditional. At the SCHUSSENRIEDER brewery Ott, they understand it in the best sense as something valuable and important that has a future in the art of brewing that they stand for with their name.

For generations SCHUSSENRIEDER brewery Ott have been brewing beer specialties with knowledge, experience and craftsmanship – combined with joie de vivre and humor. And it goes without saying that they only use the best raw materials from their homeland for their beer specialties and, of course, brew them true to the purity law. This guarantees the quality that is their yardstick. Brewing beer for people, especially in the region. For their home, which they love and in which they like to live.

ButSCHUSSENRIEDER brewery Ott want to be more than just a beer producer. They create an emotional product that brings people together. That is why they offer their guests a meeting place with the adventure brewery and Germany’s 1st and only beer mug museum in the world. With their tourist offer they are committed to Upper Swabia, one of the most beautiful regions in Germany.

It is located directly on the Upper Swabian Baroque Street and offers an attractive destination for the whole family: the SCHUSSENRIEDER Ott brewery with Germany’s 1st beer mug museum, the only museum of its kind in the world. Under the motto “Drinking culture from five centuries”, around 1200 beer mugs from the years 1550 to 1925, mostly from the private collection of brewery senior manager Jürgen Josef Ott, have been inviting you on an exciting journey through the history of beer since 1994. The unusual collectibles include an ostrich egg jug from 1670 and the largest hand-carved wooden beer mug in the world, made from 250-year-old oak beams. With a height of 1.80 meters, a capacity of 110 liters and a weight of 68 kilograms, it makes the hearts of beer fans beat faster. The materials of the jugs range from silver, porcelain, ebony, ivory, marble, crystal and glass to exotic materials such as coconut shells. These exhibits brought world travelers from different countries to Germany. So far, over a million interested guests from all over the world have found their way to the beer mug museum, which has meanwhile developed beyond the region into a tourist magnet. The beer mug used to be both an investment and a status symbol and had a great tradition for centuries. No wonder that the antique collectibles excel in originality and individuality. The beer mug culture only came to an end in 1925, when machine production began and the jugs became affordable for everyone.

After an excursion into traditional drinking culture, the shady beer garden in the brewery courtyard, a cool vaulted cellar from the 17th century or the historic museum tavern invite visitors to Swabian delicacies and fine beer specialties of the present. We serve the naturally cloudy Museum Beer Original N ° 1 in baroque flair and serve with a hearty farmer’s bread.

Another attraction in the brewery is the third largest rock crystal in the world. The brew Jürgen Josef Ott donated the colossus, weighing more than a ton, on the occasion of the presentation of crystal wheat.

The guild tree, which was inaugurated in 2007 and found its place on the SCHUSSENRIEDER brewery, is also one of the sights of the region with its historic inn signs.

Who would have thought that the small beer mug museum would develop in this way? Today it is known far beyond the borders of Upper Swabia.

A full-bodied beer specialty with natural yeast clouding. Topped with foam and provided with a beautiful bouquet of hops, delicate yeast flavors also flow into her taste.

In the drink it is balanced, soft and mild, accompanied by an invigorating freshness. Bottled unfiltered, it retains many valuable ingredients such as vitamins, minerals and proteins.

Our SCHUSSENRIEDER Original No1 was awarded the highest award for excellent taste by the International Taste & Quality Institute. The jury is made up of renowned Michelin star chefs and sommeliers. Odor, appearance, taste, mouthfeel and aftertaste are evaluated. Our naturally cloudy cellar beer achieved three out of three possible stars and thus the highest rating.

The unique, full-bodied taste of the Ott special is created by the special brewing process used by the medium-sized family brewery: the cold fermentation process in open stainless steel vats. This open fermentation has been traditionally used in the Bad Schussenried brewery since the brewery was founded, as the characteristic taste can develop better in open vats than in closed ones. The Ott Spezial is a top-quality beer of the purest quality, captivating appearance, full of character and, thanks to the six-week shelf life guarantee, it is particularly durable and mature.

The export beer with 5.3% vol. and 13.2% original wort is made exclusively from the best raw materials from Upper Swabia: wet-ground malt from local malting barley from the Schwabenmalz malting plant in Baustetten, purest aroma hops from Tettnang, yeast from our own pure breeding and crystal-clear water from the depths of the surroundings of the shooting source. This is what makes this beer so unique for Upper Swabia – which is also the new motto; “This is how Upper Swabia tastes”. 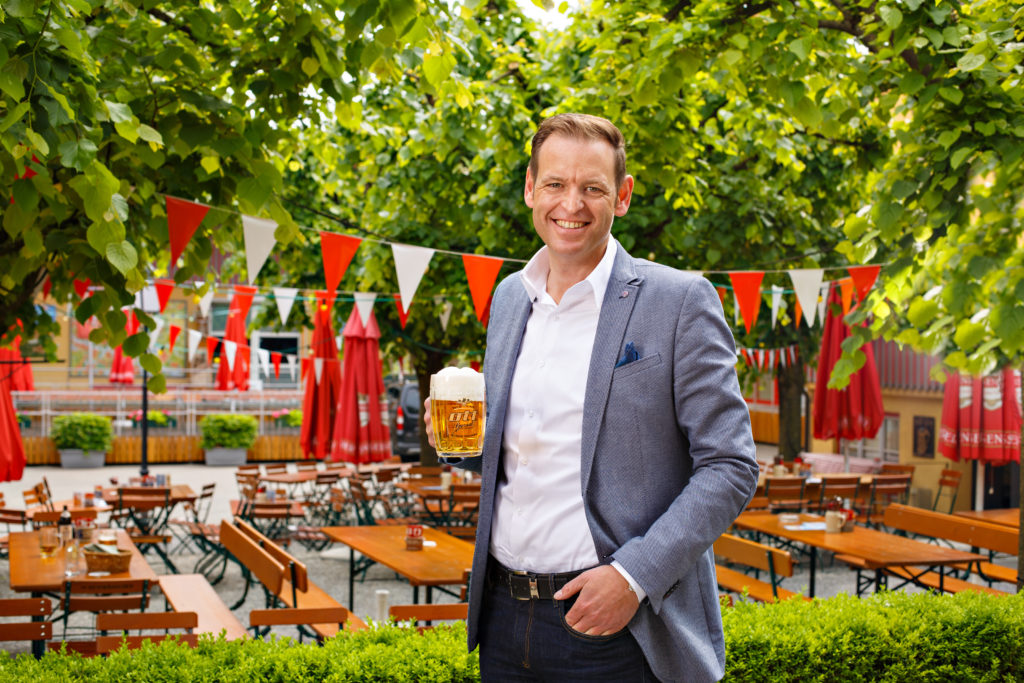 So far we are not exporting to Singapore, but we want to change this. We are looking for importers who appreciate and enjoy Germany beer with brand quality.

Please see our awards we have received, such as „World Beer Awards”. 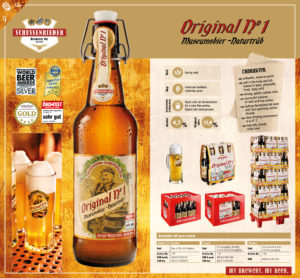 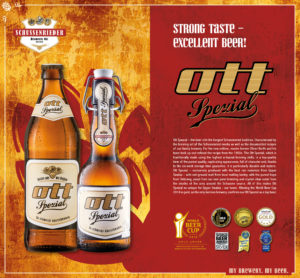 We started exporting our goods within Europe 4 years ago. We are currently represented in France, Italy and now also in Russia.

Our goal is now to supply our delicacies to Far East.